The village of Giverny 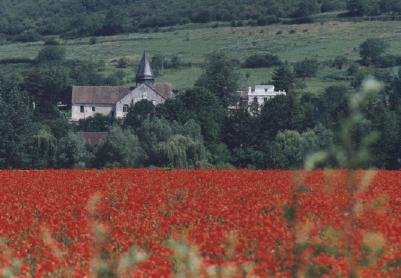 At the gateway to Normandy, 75 km from Paris and 60 km from Rouen, the village of Giverny (pronounced Jee-va-nyee) is located on the right bank of the River Seine, at its confluence with one of the two branches of the River Epte lined with willows and poplars.

The origin of the village is very ancient as Gallo-Roman graves are said to have been discovered there in 1838. In 1860 coffins made out of plaster and dating from the first centuries of our era were found while restoring the churchyard. A ruined megalithic monument close to the church and called "Saint Radegonde's grave" also testifies that neolithic people used to live there.

As early as the Merovingian time grapes were cultivated in Giverny, which was spelt "Warnacum" in old deeds. Saint-Wandrille Abbey owned several vineyards granted by Chilperic.

The church is a strange monument of Romanesque origin. It was modified in the Gothic period and during the XVth century. It is dedicated to Saint Radegonde who was reputed to cure scabies.

But Giverny rises to fame in 1883 when the painter Claude Monet discovered the village whilst looking out of the train window (the line has since closed down). Monet was enthusiastic about the spot. He found a large house to rent, "the Press House". By the end of April he had moved in with Alice Hoschedé, his lady-friend, his two sons and her six children. The house was a farmhouse with a vegetable garden and an orchard of over one hectare.

At the time there were about 300 inhabitants in Giverny, most of them farmers, and a few middle-class families.
The village consists of two streets on the hillside lined with low houses in a pink or green roughcast with slate roofs, their walls covered with wisteria and Virginia creeper. These streets are crossed by narrow lanes running down the hill. The Claude Monet Road runs straight to the village. The "Chemin du Roy" (Secondary Road 5) follows the banks of the River Epte. Claude Monet's house lies between the two roads.

In his letters Monet kept expressing his stronger and stronger attachment to Giverny. He would stay in the village until his death.

In 1890 he became the owner of the house and gardens and transformed them completely. In front of the house lies the Clos normand, full of flowers, (100, 000 plants replaced each year and 100, 000 perennials) on the other side of the road he had the waterlily pond dug. To achieve his aim he didn't hesitate and diverted a branch of the Epte River.

At the beginning of his stay in Giverny, Monet found inspiration in the surrounding countryside. But he gradually limited himself to his water garden and depicted tirelessly the Japanese bridge and the waterlilies.

From 1887 onwards a colony of foreign painters, mainly Americans settled in Giverny. But this seems to have been by chance and the charm of the place rather than the presence of Monet (which they did not know of). The painters Sargent, Metcalf, Ritter, Taylor, Wendel, Robinson, Bruce and Breck came first.

For thirty years about a hundred artists stayed one after the other in Giverny, although they did not have much contact with Monet who considered their presence a nuisance. However their art would be deeply influenced by impressionist techniques.

Monet died on 5th December 1926. He was buried in the family vault near the village church.